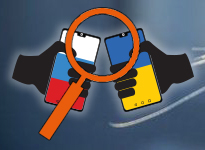 Introduction to the educational material

Evaluating news about the war in Ukraine

During World War I, it was expressed that ”truth is the first casualty in war.”* Knowing what is reliable information during a war is difficult due to two primary reasons: (1) the warring parties want to spread their portrayal of the war, and (2) it is difficult to determine what transpires when people and journalists cannot remain in areas where fighting is taking place.

To understand what happens in war, it is essential to:

Now that there is a war in Ukraine, it is crucial to keep in mind that there is a considerable amount of propaganda from the Russian government that strives to illustrate the war to benefit their interests. For example, the Russian administration, led by Putin, does not want to acknowledge the conflict as a war but instead calls it a special military operation to de-Nazify Ukraine. They also call the invasion self-defense and an act to protect the Russian speaking minority (in a country with a president of Jewish descent from the Russian speaking minority). Via news channels in Russia such as Russia Today (RT), Sputnik, and TASS, the Russian administration wants to exaggerate the external threat to not appear as the party that initiated the war. They also want to magnify their conquests for the Russian people and hide the setbacks, such as the number of casualties or the outside world’s condemnation of the war. In the conflict with Ukraine, Russian state sponsored media has previously promoted false stories and disinformation that Ukrainians have crucified children. Before the Russian invasion, there were also reports that Russia was fabricating evidence that Ukraine, not Russia, was the invading force.

In contrast to disinformation, it retains good intentions, such as the desire to protect or support other people. But spreading rumors, lies, and conspiracy theories that one believes in oneself can harm society, especially in times of war.

Source-critical navigation of news from the war

To get an adequate picture of what is happening now that there is a war in Ukraine, we need to oversee the news source critically. It is useful to think about who is the sender behind the news – is it, for example, someone who wants to spread their propaganda or someone who wants to inform objectively and correctly? What evidence is there that the news is accurate – is there, for example, image evidence or eyewitnesses that can be trusted? What do other independent news sources say about the event, can the information be confirmed?

We have compiled some exercises here where you get a chance to act as fact-checkers on some of the news that has spread about the war in Ukraine.

Learn how to evaluate news

The News Evaluator is a colloboration between RISE Research Institutes of Sweden, Uppsala university and Vetenskap & Allmänhet (Public & Science).