Deprecated: Return type of Requests_Cookie_Jar::offsetExists($key) should either be compatible with ArrayAccess::offsetExists(mixed $offset): bool, or the #[\ReturnTypeWillChange] attribute should be used to temporarily suppress the notice in /www/webvol23/1l/i7evrh38wxbjos6/nyhetsvarderaren.se/public_html/valkommen/wp-includes/Requests/Cookie/Jar.php on line 63

Deprecated: Return type of Requests_Cookie_Jar::offsetGet($key) should either be compatible with ArrayAccess::offsetGet(mixed $offset): mixed, or the #[\ReturnTypeWillChange] attribute should be used to temporarily suppress the notice in /www/webvol23/1l/i7evrh38wxbjos6/nyhetsvarderaren.se/public_html/valkommen/wp-includes/Requests/Cookie/Jar.php on line 73

Deprecated: Return type of Requests_Cookie_Jar::offsetSet($key, $value) should either be compatible with ArrayAccess::offsetSet(mixed $offset, mixed $value): void, or the #[\ReturnTypeWillChange] attribute should be used to temporarily suppress the notice in /www/webvol23/1l/i7evrh38wxbjos6/nyhetsvarderaren.se/public_html/valkommen/wp-includes/Requests/Cookie/Jar.php on line 89

Deprecated: Return type of Requests_Cookie_Jar::offsetUnset($key) should either be compatible with ArrayAccess::offsetUnset(mixed $offset): void, or the #[\ReturnTypeWillChange] attribute should be used to temporarily suppress the notice in /www/webvol23/1l/i7evrh38wxbjos6/nyhetsvarderaren.se/public_html/valkommen/wp-includes/Requests/Cookie/Jar.php on line 102

Deprecated: Return type of Requests_Cookie_Jar::getIterator() should either be compatible with IteratorAggregate::getIterator(): Traversable, or the #[\ReturnTypeWillChange] attribute should be used to temporarily suppress the notice in /www/webvol23/1l/i7evrh38wxbjos6/nyhetsvarderaren.se/public_html/valkommen/wp-includes/Requests/Cookie/Jar.php on line 111

Deprecated: Return type of Requests_Utility_CaseInsensitiveDictionary::offsetExists($key) should either be compatible with ArrayAccess::offsetExists(mixed $offset): bool, or the #[\ReturnTypeWillChange] attribute should be used to temporarily suppress the notice in /www/webvol23/1l/i7evrh38wxbjos6/nyhetsvarderaren.se/public_html/valkommen/wp-includes/Requests/Utility/CaseInsensitiveDictionary.php on line 40

Deprecated: Return type of Requests_Utility_CaseInsensitiveDictionary::offsetGet($key) should either be compatible with ArrayAccess::offsetGet(mixed $offset): mixed, or the #[\ReturnTypeWillChange] attribute should be used to temporarily suppress the notice in /www/webvol23/1l/i7evrh38wxbjos6/nyhetsvarderaren.se/public_html/valkommen/wp-includes/Requests/Utility/CaseInsensitiveDictionary.php on line 51

Deprecated: Return type of Requests_Utility_CaseInsensitiveDictionary::offsetSet($key, $value) should either be compatible with ArrayAccess::offsetSet(mixed $offset, mixed $value): void, or the #[\ReturnTypeWillChange] attribute should be used to temporarily suppress the notice in /www/webvol23/1l/i7evrh38wxbjos6/nyhetsvarderaren.se/public_html/valkommen/wp-includes/Requests/Utility/CaseInsensitiveDictionary.php on line 68

Deprecated: Return type of Requests_Utility_CaseInsensitiveDictionary::offsetUnset($key) should either be compatible with ArrayAccess::offsetUnset(mixed $offset): void, or the #[\ReturnTypeWillChange] attribute should be used to temporarily suppress the notice in /www/webvol23/1l/i7evrh38wxbjos6/nyhetsvarderaren.se/public_html/valkommen/wp-includes/Requests/Utility/CaseInsensitiveDictionary.php on line 82

Deprecated: Return type of Requests_Utility_CaseInsensitiveDictionary::getIterator() should either be compatible with IteratorAggregate::getIterator(): Traversable, or the #[\ReturnTypeWillChange] attribute should be used to temporarily suppress the notice in /www/webvol23/1l/i7evrh38wxbjos6/nyhetsvarderaren.se/public_html/valkommen/wp-includes/Requests/Utility/CaseInsensitiveDictionary.php on line 91
 Focus: Ukraine – For teachers – Nyhetsvärderaren Hoppa till innehåll 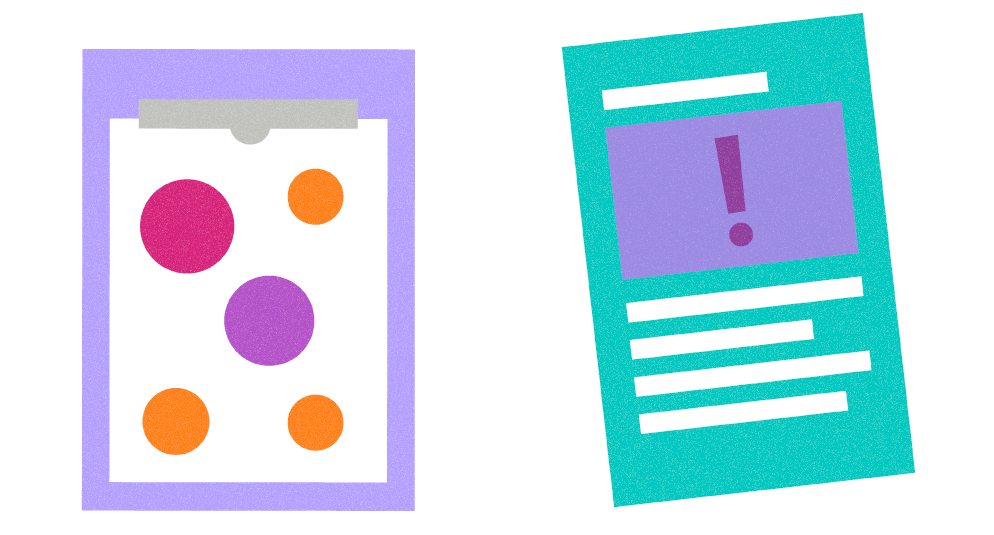 When the students have finished working on the exercises, gathering their impressions in a joint discussion is suitable. It can be relevant to ask, for example:

Comments on the exercise

The information in the exercises is particularly deceiving with pictures and videos in an inaccurate context. The fact that it is not fabricated or manipulated content may be because it is unnecessary to produce this since there is already other material that can be utilized. It may also be because platforms such as Youtube, Facebook, and Twitter are now trying to remove disinformation, such as manipulated images and videos with the intention of, for example, influencing political developments. Twitter has also started labeling some posts to warn of tampered content or content presented in an incorrect context (as in exercise 6). Much of the disinformation about the war in Ukraine is published in Russian and is specifically aimed at the Russian population. It can also be about spreading wrongful information without malicious intent – this is not disinformation though. It appears that those who spread the misleading information do not always have malicious intent, but spreading incorrect information can lead to disorder, and confidence in newspapers and politicians can deteriorate if this occurs frequently.

To ensure that no one has misunderstood any information, below is a key that is useful for you as teacher to go through after the students have completed the exercises. Please make sure that they all get the correct information. It is also important that they have all seen the tutorial about how to conduct reverse image search included in the first exercise.

Some good and/or bad things with disseminating information in each exercise are also described below. Of course, there is more to say about each task, but the facts mentioned below could be valuable to clarify for the students.

Key with facts about the exercises

Misleading image! The picture was published several years ago and is not related to the context. She is hence not on her way to the current war in Ukraine. Through a reverse image search on TinEye, it becomes clear that the image is not from 2022.

Uncertain information about the number of casualties. Other information in the tweet comes from a news magazine, The Kyiv Independent, with a relatively reliable stature, but it is always challenging to determine how many people have died or been injured in war. Swedish public radio reported on March 8th that Ukraine proclaims that about 12,000 Russian soldiers were killed, while the Russian officials state 600 dead soldiers. Data on the number of dead Ukrainian soldiers are missing.

The intent behind the information is difficult to determine, but it seems to be misinformation.

The mixture of more or less credible information is typical on social media. It is problematic to mix accurate and misleading information because it makes it problematic for readers to determine what is valid, senders with good intentions can bear a flawed reputation and contribute to the information disorder that benefits those who want to question facts and evidence.

Confirmed image! The photograph of the injured woman has been confirmed. The photograph taken by Aris Messinis comes from the time and place where the bombs fell. The images of injured people and houses are comparable to previous pictures from the gas explosion in 2018 but are indeed from 2022. To say that she is an actress or that the photographs are false can be disinformation, states the BBC.

The image is not disinformation or misinformation. However, the information coming from a gas explosion and accusations that it is an actor is misinformation and disinformation, respectively. Crediting credible images for being fake is a manipulative strategy used online, not least in times of war.

The picture can be useful to demonstrate the consequences of the war. Correct and factual reporting of events can help people better understand what is transpiring. On the other hand, misinformation and disinformation is harmful because it makes it difficult for people to trust what is true.

Misleading image! The picture comes from an accident at an air show in 1993. The image is accordingly taken out of context. The fact that the image is also used in a news newspaper in Latvia is problematic, and unfortunately, fake news is sometimes published in newspapers that try to double-check the information, or stunts are posted online that appear to be real news. Therefore, it is important to know which media have satisfactory quality.

The intention behind the information is a bit difficult to determine. If it is the case that the sender knows that the image does not belong to the text, it is about deliberate misinformation, and if it is unconscious dissemination, it is misinformation.

Mixing misleading images into news can seriously damage the sender’s reputation of other news media and contribute to information disorder.

Misleading image! The picture is from 2016 and was taken by a man who was later fired because he was accused of creating misleading war images, the BBC reports. The photo is accordingly taken out of context and possibly fabricated. At the same time, the picture shows the conflict between Ukraine and Russia that began in 2014, so it is at least partly placed in the proper context.

The fact that an experienced and knowledgeable politician can make the mistake of using an image out of context show how easy it is for people to share misleading information. The intention behind the information is difficult to determine, but it appears to be about misinformation.

Mixing misleading images into comments makes it difficult for readers to determine the level of truthfulness, damages the sender’s reputation, and contributes to information disorder. Important messages could be lost if they are mixed with misleading information.

Confirmed information! Several different sources confirm the information, and pictures from the events have been reviewed and published by news agencies like the Guardian.

Accurate and factual reporting of events can help people to further their understanding of what is happening and evaluate based on that information.

Misleading video! The pictures come from a fire in China in 2015.

The video is marked with a blue warning text displayed out of context. It is common not to notice this text, so point that out to the students.

The intent behind the information is a bit tricky to determine, but it seems to be misinformation intended to intimidate or deceive people and attract clicks or create reactions.

Confirmed information! The video from TikTok has been double-checked by fact-checkers who construct an updated map with correct information about what happens in the war. In all probability, the information is accurate because it was examined based on when and where the video was published, which can be seen here: 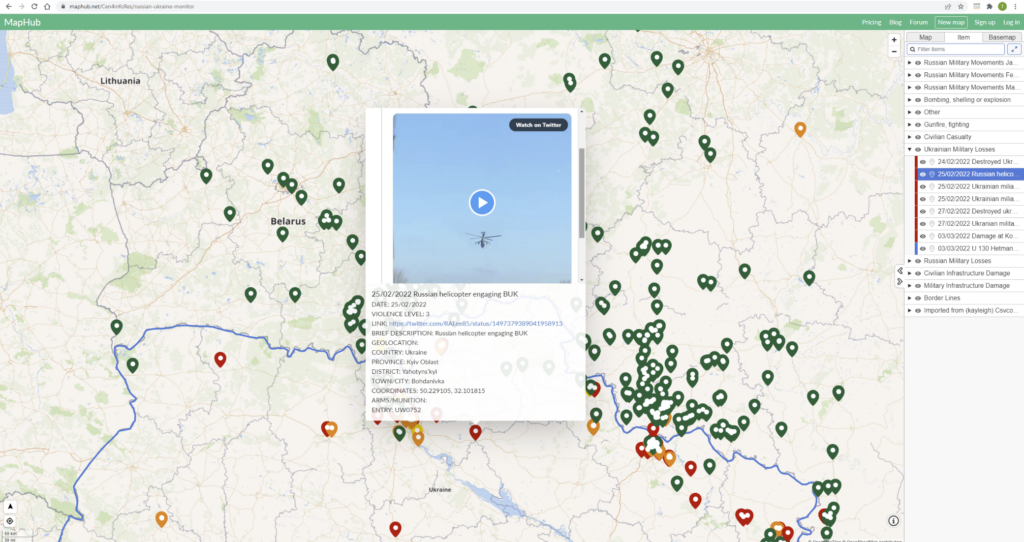 The map with current and reviewed data on what is happening in Ukraine was created by a group, Bellingcat, with special expertise to review data on wars, shown here.

The information is correct and can thus contribute to awareness of what is happening.

However, individual posts on TikTok must be compared with other information that provides more of a comprehensive picture of the course of events. The fact that a single Russian helicopter shoots down a military vehicle does not mean that Russia wins the war or that the war takes place mainly between military actors.

Disinformation! Several independent sources have confirmed the fact that the house that was damaged in the robot attack was a hospital with pregnant women. The fact that it was a Nazi militant group is part of the misleading propaganda used by the Moscow administration to excuse their invasion of Ukraine, which has a Jewish president from the Russian speaking minority.

According to the press agency AP, the woman carried out on the stretcher has died, as has her baby, and the woman who goes down the stairs is smeared due to the Russian propaganda on social media. Twitter has now deleted the post from the Russian Embassy.

Misinformation is harmful because it makes it difficult for people to trust what is true and to trust each other. Lies about the war can make the civilian victims suffer even more psychologically. Propaganda can deepen the gap between people (polarization) and make it harder to find peaceful solutions.

If you want to stay up to date on fake news about Ukraine, you can follow fact-checkers, for example, here:

Learn how to evaluate news

The News Evaluator is a colloboration between RISE Research Institutes of Sweden, Uppsala university and Vetenskap & Allmänhet (Public & Science).